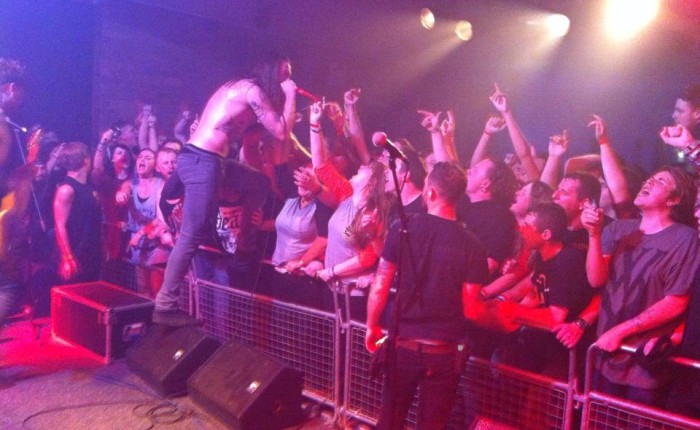 While She Sleeps in Chesterfield!

If you went to Download 2014, you may well have seen a group of lads from Sheffield rocking it on the main stage. Receiving a well-deserved 5K rating on their debut album (This is the Six) and winning Kerrang! magazine’s K! Award for Best British Newcomer in 2012, While She Sleeps have built a loyal fan base, with almost a quarter of a million Facebook ‘Likes’. So how did a major band like While She Sleeps come to play in a tiny venue in Chesterfield?
Niki Stephenson, one of Real Time Live’s owners explains:

“Matt and Adam are ex-pupils of Real Time Music and are still loyal customers at the shop. Earlier this year, the band needed a rehearsal space for their major shows over the summer, so they naturally thought of us.

“We had so much fun with them, they kindly approached their management to suggest a gig at Real Time Live as a way of giving something back to their local fans.

The secret gig was kept under wraps until the end of August, when the festival season was over, but once announced, the tickets sold out within an hour – the fastest selling gig to date!

The band also wanted to give a local band the opportunity to open for them – and who better than metal warriors Clawback the Day?  Having just released their first EP, this hard-working local band opened our special evening in style! View their first video here: http://youtu.be/U4tj9oKQNFU.

The night itself was a massive success, and was also covered by representatives from the press, including Kerrang! Magazine, who gave it a 5K rating!

Probably the hottest, sweatiest gig we’ve ever hosted, we loved every minute of it – and hope those who were lucky enough to get tickets did too!

Here’s to more gigs like it in the future!