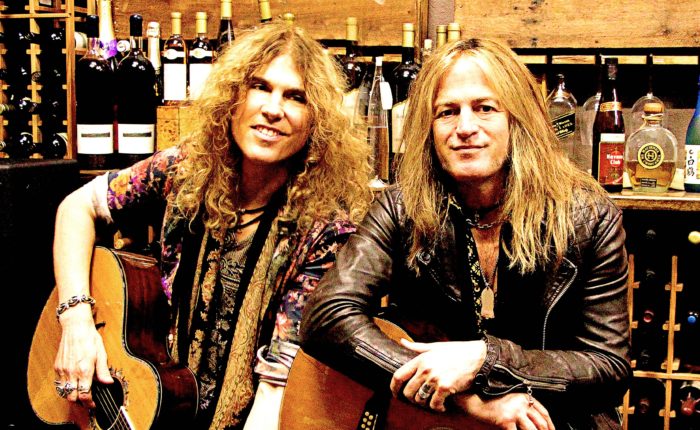 Up close and intimate with rock stars in Chesterfield

There’s nothing quite like an intimate and personal live music gig – but when it features musicians with a pedigree as impressive as this, and when the tour is called ‘Stripped and Naked’… well, you just know it’s going to be a pretty special evening!

Real Time Live in Chesterfield, Derbyshire is the first stop on the Burning Rain UK acoustic tour, which kicks off on April 3rd 2019. This unique venue, famed amongst bands for its amazing sound system, regularly hosts sell-out appearances from local musicians, tribute bands and well-known artists from all over the world.

Owners Niki and Stevo, musicians themselves who also own the well-stocked music shop downstairs, have built a reputation for hosting a wide variety of events – all to rave reviews from the musicians who have graced the Real Time Live stage.

They are now delighted to add the first Burning Rain acoustic gig in the UK, featuring Doug Aldrich and Keith St John, to the list of highly credible rock musicians playing at the venue.

Guitarist extraordinaire Aldrich (Whitesnake, Dio, Dead Daisies) and vocalist St John (Montrose, Lynch Mob, Kingdom Come) are stripping it right back on this acoustic tour to promote the band’s fourth studio album, Face The Music. The video of the title track has already received 100k views on YouTube, and Doug Aldrich has said he feels this is by far his favourite Burning Rain record to date.

The two founder members of Burning Rain will be performing new songs from the Face the Music album, including the first single Midnight Train, together with their favourite tracks from the previous three Burning Rain records.

Rock fans can also expect covers of songs from Whitesnake and Montrose, as well as a few surprises!

Tickets are just £16 advance or £18 on the door. Don’t miss this rare opportunity to experience getting Stripped and Naked with Burning Rain! Find out more and book online at https://www.facebook.com/events/1079607825555880/