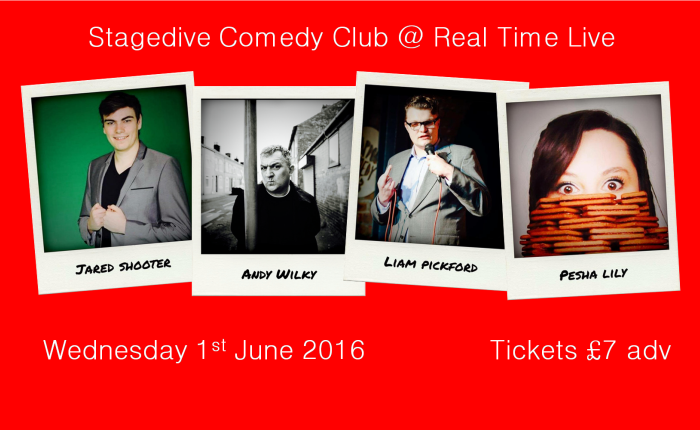 Midweek comedy night set to be best yet!

Opening the show is Liam Pickford, a runner up in Chortles Student Comedian of the Year 2015. Pickford has made appearances on BBC Radio 4 and is one of the fastest rising stars on the circuit.

Next up is Pesha-Lily. Pesha is fairly new to the comedy circuit but don’t let that you put off. In her 7 short months on the circuit she has won competitions and had a four-night sell out show at the Leicester Comedy Festival. She recently placed as a runner up in Comedy Hats’ Comedian of the Year.

Our headliner for tonight is none other than the fantastic Andy Wilky. In 2000, he headlined with Paul Merton and John Thomson at the opening night of the Manchester Comedy Store. His appearance there led to a role in the film 24 Hour Party People (2002).  Television credits include roles in Cutting It, BAFTA winners ‘Buried’ (Ch4) and ‘Cold Feet’ (ITV).

Wilky has appeared in almost every television production by Peter Kay, including Phoenix Nights and Max & Paddy – with recent work including playing landlord ‘Mr Foley’ in BAFTA winning ‘Mrs Browns Boys’ as well as roles in the films ‘Looking for Eric’ (Ken Loach) and ‘Almost Married’.

His radio credits are many and varied, with his own series ‘A Set & A Song’ on BBC Radio 4 plus four series of ‘The In Crowd’ – also on BBC Radio 4.

Wilky also wrote and played the lead role in two plays, both of which received critical acclaim on their ‘Edinburgh Festival Fringe’ debuts.