Tickets £10 ADV / £12 OTD This event is an 18+ event
The Tygers of Pan Tang are Robb Weir (Guitar), Jacopo Meille (Vocals), Gav Gray (Bass) who played with the band at the 1999 Wacken festival re-union, Craig Ellis (Drums) who has been with the band since 2000 and the latest recruit was local North East guitar prodigy Micky Crystal who joined in 2013.
The band was originally formed in 1978 by Robb Weir (guitar) who then recruited Brian Dick (drums), Rocky (real name Richard Laws, bass), and Jess Cox (vocals). Rapidly building a local following from relentless touring, they were first signed up by local independent label Neat Records who released the debut single Don’t Touch Me There before MCA gave them a major record deal. The Band released their debut album `Wild Cat` in 1980.
Also in 1980 John Sykes (later of Thin Lizzy, Whitesnake) was added as a second guitarist to compliment the musical direction the band wanted to pursue. Jess Cox was replaced by Persian Risk vocalist Jon Deverill and this line up released the Classic LP `Spellbound` in 1981. The album was critically acclaimed and loved by the fans. Instead of promoting `Spellbound` to the full with worldwide touring the record company wanted the band to record a third album almost straight away which produced the under-rated Crazy Nights album. The frustration became apparent within the band and shortly after recording Crazy Nights and just before the start of a European tour John Sykes decided to leave. The band approached ex-Penetration guitarist Fred Purser who had to learn the set in two days before the tour began.
The bands fourth album `The Cage` (1982) was their most accomplished effort so far and the future looked promising. Unfortunately again the record company intervened and were not prepared to promote the band unless they agreed to play more cover recordings (this followed the band’s worldwide hit with `Love Potion No. 9`). The band tried to break free from their contract to concentrate on their own material, but MCA’s demands exceeded the willingness of any other record company to buy out the contract and the band broke up in frustration.
In 2001, Robb Weir decided to reform the band as a going concern, despite being the only original member. Robb wanted to keep the Tygers name alive, play the music he loves and to play for the fans that he had remained close to.
In 2008 the band released their real comeback album `Animal Instinct` and the reviews were spectacular. Geoff Barton from Classic Rock Magazine gave the album a 8/10 with comment that he preferred the album to both Whitesnake’s `Good to be Bad` and Def Leppards `Songs from the Sparkle Lounge`. The album received fantastic worldwide reviews in almost all the major publications and websites alike.
2010 was regarded as the 30th Anniversary of NWOBHM, this saw the Tygers celebrate the 30th Anniversary of their debut release `Wildcat` and to commemorate this, the band re-recorded five tracks from the `Wildcat` album and called the release `The Wildcat Sessions` EP. In 2011 the second instalment of the Sessions EP was released `The Spellbound Sessions EP.
2012 was a special year for the band, not only were the Tygers invited to play one of the premier music festivals `Sweden Rock Festival` it also finished the writing of the new album ` Ambush`. A new record company was also on board `Rocksecter Records` and Chris Tsangarides was engaged to produce and mix the new album as was Rodney Matthews who was commissioned to produce the albums artwork. Chris was the producer for the `Wildcat` and `Spellbound` albums and who better to get that Tyger signature sound and Rodney painted the iconic `Crazy Nights` cover. The back-room team was back in action and the band really have excelled with `Ambush` which gives everything expected from the Tygers of Pan Tang.
In 2013 the Tygers hit the road to promote `Ambush` and played a number of venues around Europe, 2014 is expected to be the same. The spirit and camaraderie within the band has never been better and this is reflecting in both the writing of new songs and the live performances. It’s exciting times for the Tygers and 2014 should be another busy year.
Description
In the May 1979 issue of Sounds magazine the term ‘New Wave of British Heavy Metal’ was used to describe a second wave of heavy metal bands that emerged in the late 1970’s.
It was an era considered to be a major foundation stone for many metal genres. The pioneers of NWOBHM who have had a major influence with their musical style include Iron Maiden, Motörhead, Saxon, Diamond Head and … Tygers of Pan Tang. 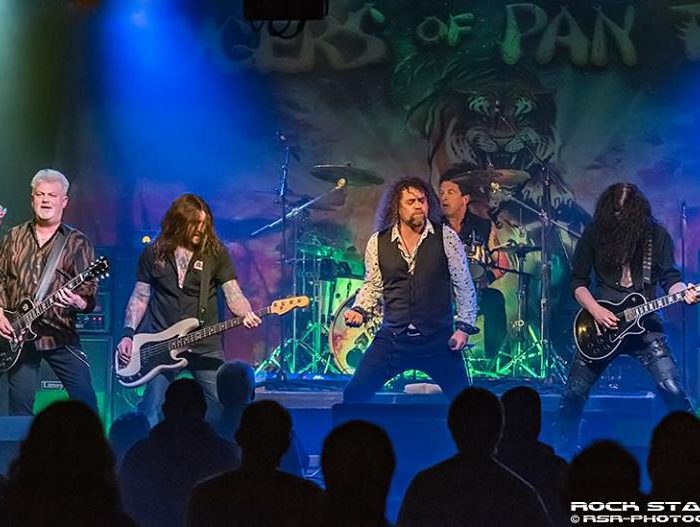