Tickets £8 ADV / £10 OTD
The Thin Lizzy Experience formed in the Christmas of 2007 when friends Simon Kaviani (Vocals/Bass) and Chris Gill (Guitar/Vocals) randomly bumped into a long-haired rocker at a Black Sabbath concert, who was sporting a huge tattoo of Phil Lynott on his right arm. Simon went over to congratulate him on his awesome tattoo and taste in music and after the man introduced himself as John Rodgers (Guitar/Vocals), the three got talking about forming a Thin Lizzy tribute band and with the addition of drummer Chris Reynolds, The Thin Lizzy Experience was born.
With their mantra of bringing back the raw essence, power and energy of Lizzys’ live performances along with Simons’ spitting image of Phil, it wasn’t long before The Thin Lizzy Experience got heads turning and tongues wagging. The last year especially has seen the bands’ audience increase dramatically, helped along nicely by the renewed interest in the reformed Thin Lizzy.
With a sets that can last up to two and a half hours straight through, not only does this band deliver a great show with all the lights and pyrotechnics, but amazing value for money! This band has brought grown men in their fifties to tears with their true to life rendition of the classic song ‘Still In Love With You’, as well as many of their other hits like ‘The Boys Are Back In Town’, ‘Emerald’, ‘Jailbreak’, ‘Dancing In The Moonllight’ to name a few.
See these boys live and you’ll not walk away thinking you’d just seen a tribute band…you’ll be wondering whether you were seeing things – if Phil Lynott had come back to life and whether you had just seen the real Thin Lizzy
Slade UK
Since arriving on the tribute scene Slade UK have left fans open mouthed with the accuracy of their show. Once thought impossible, Slade UK recreate the experience of a real Slade show with all the power of the original band. Once seen, never forgotten. Relive a time when Noddy and the lads were the best live rock & roll band in the world.
Highlights so far – being chosen to open for the legendary Roy Wood of Wizzard on his 2013 Christmas tour, appearing on the main stage of Tribfest 2014, meeting Don Powell and finding out Mr Noddy Holder himself approves. 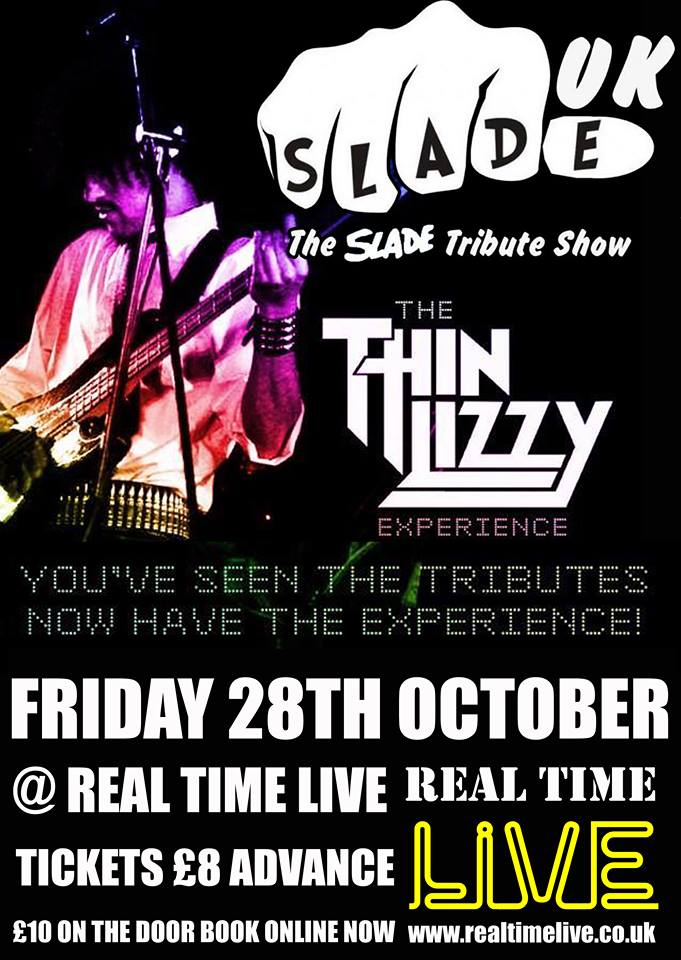