Tickets £7 ADV / £9 OTD
Stagedive comedy club and resident compare Jared Shooter return fresh off the heels of our first annual comedian of the year competition for our 2 year birthday special!
Opening the show, the deserved winner of the Stagedive comedian of the year 2017, Tom King! As well as winning our comedian of the year competition, Tom has gained a raft of accolades including winning both The Stagefright comedy ‘Crooked smile new act of the year 2015’ and The Bury Met new comedian of the year 2015. He was also a semi-finalist in The Leicester Square Theatre new comedian competition 2015 and in March 2016 won Beat the Frog at Manchester’s famous Frog and Bucket comedy club.
Our headliner on our second anniversary show is none other than Mick Ferry! On our TV screens, Mick has recently starred in BBC One`s Michael McIntyre’s Comedy Roadshow as well as Comedy Blue and The Comedy Store for Comedy Central. He made his big screen debut in 2009 in Ken Loach’s Looking For Eric – a hit feature film at the Cannes film festival where it was nominated for the prestigious Palm D’Or. A prolific writer, Mick was a writer on John Bishop’s Britain for BBC One and has also previously written for BBC3`s Smalltime.
BEST UK LIVE STAND UP 2013
“KEEPING THE ART FORM OF THE BELLY LAUGH ALIVE….MICK FERRY ISN’T ONE YOU SHOULD MISS”�The Mirror *** 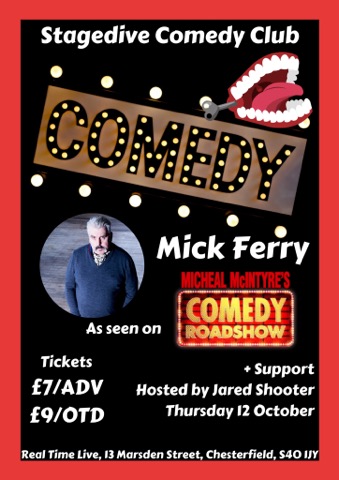