Jean Genie The Uk’s No 1 Tribute to David Bowie

Tickets £12 ADV / £14 OTD (18+ event)
The ultimate tribute to David Bowie !
JEAN GENIE… Featuring songs from the whole amazing career of David Bowie
Featuring John Mainwaring whose vocal & visual tribute to Bowie is totally awesome.
It all started in 1993 when Jean Genie was formed following the discovery of David Bowie look-and-sound-alike artiste John Mainwaring. The band soon became famous for their flamboyant stage show and today the band have many impressive claims to fame. Jean Genie are one of the first tribute bands to play alongside the original artistes and they performed on stage with the original Spiders From Mars at the Mick Ronson Memorial Concert after show party, playing to VIP stars such as Joe Elliott (Def Leppard), Roger Daltry (The Who) and Roger Taylor (Queen), to name but a few.
Jean Genie have headlined the David Bowie Fan Club Convention more than once. They’ve played their energetic and sexy 70’s and 80’s show, complete with dazzling costumes and stunning effects, to capacity crowds at festivals such as The Hastings Music Festival and have brought pleasure to many fans during their numerous Irish tours, including invited performances at the prestigious Olympia Theatre. Jean Genie are well known for being perfectionists; news of their popularity has even reached David Bowie himself.
John Mainwaring, vocalist and songwriter, has made numerous appearances and has undertaken numerous press/radio interviews. He has toured extensively as Ziggy Stardust (to critical acclaim) in the raunchy theatre show Freak Out which topped the Rocky Horror Show in popularity. The band have played an expanse of Europe, America and the Middle East.
He has been Number One in both Israel and Lebanon and has even been produced by Tony Visconti who produced David Bowie himself.
The Jean Genie show includes songs such as Starman, Rebel Rebel, Life On Mars, Jean Genie, Modern Love, Young Americans, Let’s Dance and many more classic hits 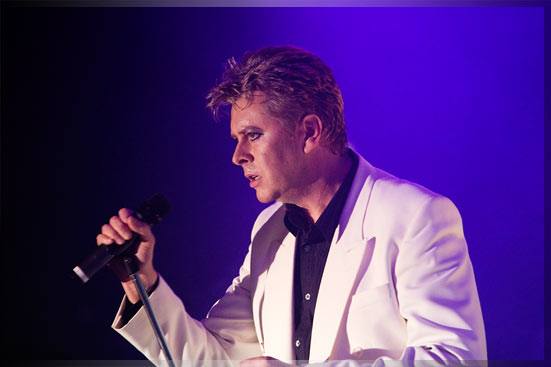