Tickets £10 ADV / £12 OTD
Hotter Than Hell is Europe’s Ultimate Kiss Tribute Band, with its Band members coming from previous KISS Tribute’s from all corners of Europe & founded in 2003 by Front man – ‘Marty McStravick’.
They are voted as one of the hottest Kiss Tribute Shows in Europe, they deliver the ultimate night out in tribute to the Hottest Band in the World!
Hotter Than Hell deliver the world-renowned classic 1970s Style KISS Stage Show, by mimicking it in every way with Mind-blowing Pyrotechnics, Fire breathing, Blood Spitting, Smoking Guitars, Greasepaint Make-Up, Theatrical Costumes and 7-inch Platform Boots. Replicating songs from the KISS Multi-Platinum Hits from the 70s to present such as: Detroit Rock City, Crazy Crazy Nights, Rock N Roll All Night and God Gave Rock and Roll to You.
Gigs include special appearance with Bob Kulick (Grammy Award Winning Producer and Guitarist for Meat Loaf, Paul Stanley 1978 Solo Record and of course KISS), as well as their most successful turnout ever at Mathew Street Liverpool Festival, with 9000 people attending.
Hotter than Hell is a major attraction at all the top music venues across the UK, Ireland & Europe.
Lead Singer ‘Marty McStravick’ had his claim to fame by actually Teaching Guitar & Rock Band Mentor for none other than ‘Paul Stanley’ of KISS’ Son – Evan Stanley at a Rock Camp in a New York State in the summer of 2009.
Rock is their moto and belief, and their love of performing and re-living the greatest stage show on earth is what keeps Hotter than Hell so amazingly precise and truly entertaining.
Shock Rock at its Best-
Get Ready For a Crazy, Crazy Night! 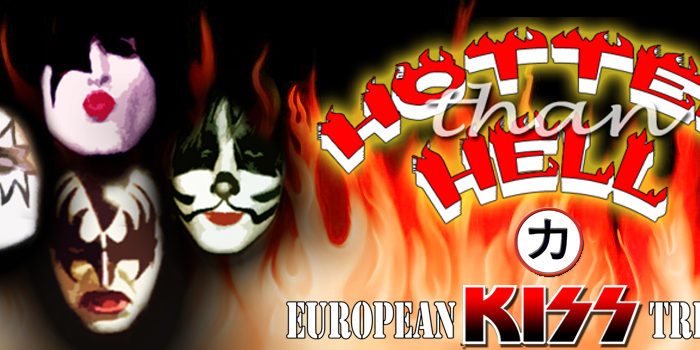