“Federal charm invest swaggering riffs, sleazy slide flourishes and cinder-raw vocals with a confidence that is utterly winning”, describes Classic Rock, and with their hotly anticipated self-titled debut album set for release through Mystic Records this summer, it is clear to see whFEDERAL CHARM – Paving a new path in rock, blues and soul. NME and Classic Rock darlings are making a big impact. http://www.federalcharm.co.uk/
Biography
Manchester’s Federal Charm are already being hailed as the next big thing in the new wave of blues rock bands. If you haven’t already heard about this band you soon will. From the attraction of the twin guitar partnership of Nick and Paul to the heavy bombast rhythm section comprising of bassist LD and drummer Danny Rigg, Federal Charm take influence from the classic 70’s bands. Combining the retr…o sound and adding a modern unique take that makes them relevant to today and gives them wide appeal. Their fresh direction has turned heads in the industry with many describing the band as having the most cutting edge debut album in recent years.

Federal Charm’s live show is a powerhouse performance, but not without showcasing their artistic quality, with tracks such as their take on Lowell Fulson’s Reconsider slowing things down and allowing their profound blues talents to mesmerise the crowd, before jetting back into the rip-roaring style which is making this band a real crowd favourite.

y there is such a big buzz around this band. After securing many high profile support slots with the likes of Southside Johnny, Jefferson Starship, and Mott the Hoople under their belt, they will be touring the UK extensively this year, as well as headlining multiple festivals. Reviewing the album, bluesandsoul.com claims that as a band trying to emulate the classic sound of 70s rock bands “you need big balls to do this stuff justice, and there are four XXL pairs here.” This is a band not to be missed. See More
Description
“With a satchel full of influences that belie their tender years, Federal Charm are unabashed blues-rockers who take inspiration from that scene’s 70s genesis, citing Zeppelin and Free in particular. What matters is what they do with these influences, and Federal Charm invest swaggering riffs, sleazy slide flourishes and cinder-raw vocals with a confidence that is utterly winning”. – Classic Rock …Magazine
http://www.youtube.com/watch?v=CnS5OpjAoCY

“You need big balls to do this stuff justice, and there are four XXL pairs here.” – Blues and Soul Magazine

“Federal Charm are easily one of the hottest bands to be surfacing on the Manchester scene.” – 4Q Magazine

“There’s nothing dusty or desiccated about Federal Charm’s spin on the Blues, which ram-raids the Delta masters, applies 70’s style chest hair and frogmarches the result into the post-millennium.” – Classic Rock presents… The Blues 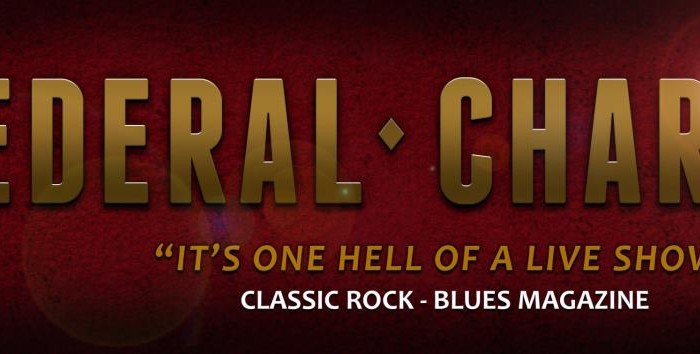