Joining a well established band can always be a scary experience – wondering how you will fit in with your new band mates, hoping the critics will take to you but most nerve wracking must be the expectation of the fans that may have lost their favourite band member. Now add to all this a lineage that started over 40 years ago with ERIC CLAPTON, MICK TAYLOR, WALTER TROUT and COCO MONTOYA and you may start to feel what it must have been like for Buddy Whittington in 1993 when he was asked by JOHN MAYALL to become the latest member of the musical elite that is the BLUESBREAKERS.
Born in Fort Worth on the 28th December 1956, Buddy Whittington began playing guitar at the age of eight after being inspired by his sist…er’s records of the Beatles and Rolling Stones. It was however, John Mayall’s Bluesbreakers with Eric Clapton that was the strongest influence at this early age. Although he became versatile enough to be able to play anything from the country music of bob Wills to the rhythm and blues classics of bill Doggett, to rock and roll (influences that can be heard in playing both on record and on stage today) his main love was the blues. During the early eighties he formed and sang with his own group “The Sidemen”, who became well known to a large audience who loved their down home grooves. In 1991 “The Sidemen” were booked at a club called, Dallas Alley, to open up for none other than John Mayall. Apparently John was impressed enough to keep in touch and when Coco Montoya left the Bluesbreakers in 1993, there was no doubt in John’s mind who to call.
Now firmly established as an all time Bluesbreaker favourite and the recipient of much critical acclaim from the music press, Buddy continues to wow audiences around the World with his incredible live performances and his written contributions to Mayall’s records. In 2003, Buddy got the opportunity to share the stage with his childhood hero, the most famous Bluesbreaker of them all, Eric Clapton, when Clapton was reunited with John Mayall at the latter’s 70th birthday concert in Liverpool. The resulting DVD and CD show perfectly that Buddy Whittington fully deserves Mayall’s epithet as “The Greatest Of Them All”.
As testament to Buddy’s value to Mayall, for the first time in it’s long history, an existing member of the Bluesbreakers will be exploring additional musical avenues as a soloist whilst still a member of the band. Buddy has recorded a brilliant self titled solo record, his first, which is released through Blues Boulevard Records 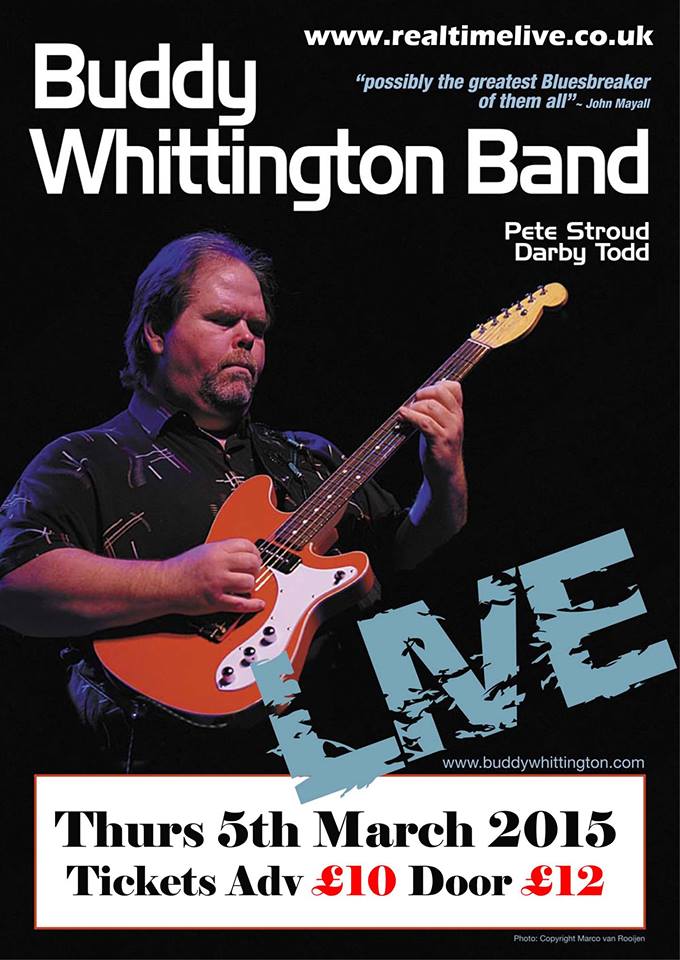