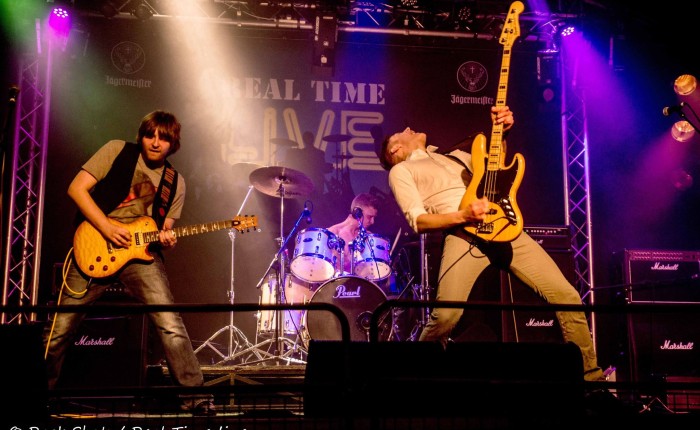 This year’s Derbyshire Times Band of the Year was held at Real Time Live for the second year running, and what a hard-fought competition it was! The standard of the 43 entries received was phenomenally high – but only 12 bands could make it through to the live semi finals, held on 24th February and 4th March, to a roomful of mid-week support from local music lovers. After two exciting semi-finals, the six finalists were announced: House Of Thieves, Spitfire, Firebomb, Silverback, Fly On Byrd, Fly On and Black Thorn. All excellent bands, and all in with a great chance of winning.

Illness struck two of the bands on the night, with Spitfire and Firebomb having to withdraw – leaving the remaining four fighting for the title. The talented Heather Burns from Rock Shots supported the whole competition, taking amazing photos of the bands while they played.

The team of judges had a tough decision to make, as all the performances were fantastic – so whilst they deliberated, the crowd was treated to an awesome set by Paper Bullets.

When the set finished, the winner of the 2015 Band of the Year was announced….*drumroll*…. Silverback!

They won a fabulous array of prizes, including of course the Band of the Year trophy, which has been used since the start of the competition in 1987.

Getting used to the limelight, Silverback have already given their first interview – read it here: http://www.chad.co.uk/what-s-on/gig-guide/band-of-the-year-silverback-s-first-interview-as-champions-1-7151961

Congratulations to all our entrants and finalists – the whole Real Time Live team love encouraging local talent and I’m sure this won’t be the last we’ll see of all of these bands!